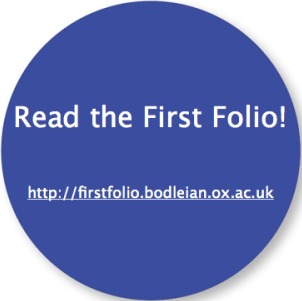 To celebrate Shakespeare’s 449th birthday today, we are delighted to publish the digital facsimile of the Bodleian’s First Folio. Thanks to the generosity of hundreds of supporters of the Sprint for Shakespeare campaign, we have been able to conserve, digitize and now publish online images of this precious treasure of the Bodleian’s collections.

Welcome, old friends and new readers alike! Here is the story of this remarkable book so far.

In the winter of 1623, a copy of Shakespeare’s newly printed First Folio arrived at Oxford’s Bodleian Library from London. Some time later, it left the Library and for years it was lost from view.

But in 1905, Gladwyn Turbutt, an undergraduate at Magdalen College, brought a tattered copy of an early Shakespeare Folio into the Library for advice on its binding. The sub-librarian on duty, Falconer Madan, immediately knew it was the lost Bodleian First Folio, still in its original binding.

Excited as he was, Madan publicized the discovery. Word of it reached America, from where an anonymous prospective buyer offered an enormous £3,000 for the book. Later the would-be buyer was revealed as the chairman of Standard Oil, Henry Clay Folger.

The book’s owners, the Turbutt family of Derbyshire, gave the Bodleian a chance to match the Folger’s offer. Funds were scarce, but the book was particularly precious, and so the first public fund-raising campaign in its history was born. It needed an extension from the Turbutts and over 80 donors to raise the sum, but finally, in 1906, the First Folio returned to its first owners.

In the winter of 2011, Emma Smith gave a talk on her research into this copy of the book, rarely seen by scholars due to its fragility. Emma’s lecture, her generosity, and her passion for sharing knowledge sparked a new public fund-raising campaign, Sprint for Shakespeare. With support from champions led by Vanessa Redgrave, and hundreds of donors, colleagues from across the Bodleian have worked to conserve, digitize, and publish the book online.

This book, lost and found, tells an extraordinary story of overwhelming generosity, recent and historic, intellectual and financial. We know an unusual amount about its past: who bound it, and when (William Wildgoose, in February 1624); we know its exact position during the first years of its life – through the theatre closures of the Commonwealth – chained to a shelf in the recently completed Arts End of Duke Humfrey’s Library. Thanks to the efforts of Falconer Madan and Strickland Gibson, we have a detailed description of its state in 1905. E W B Nicholson’s gift for administration has left us a complete archive of its first funding campaign.

More surprising may be what we do not know of its history: how the book came to the Bodleian in 1623 – whether through the Library’s agreement with the Stationers’ Company or as a presentation copy; how and when it left the Library; who owned it before the Turbutt family.

But perhaps the best stories are the ones the book itself tells – its plays, of course, but also how it was printed, bound, kept, and above all read. It has plenty left to tell us, with its first-instance Droeshout engraving, the poor quality of its paper, an unidentified manuscript poem, an apple pip squashed flat in its gutter, of how King John appears barely touched while Romeo and Juliet has been read to tatters.

We are excited that public support and digital technology allow us to share, rather than compete for, this treasure of the Bodleian’s collections. Today we publish the digital facsimile online, freely available to all. We hope you will help us tell its stories.

A version of this blog post first appeared on the excellent Shakespeare’s England blog, thanks to the kind offices of Dr Victoria Buckley, who also came up with the title for this post.