Graphology – the scientific-sounding name for guessing a person’s character traits from their handwriting – is rubbish. This from an official forensic handwriting analyst during a fascinating talk at the CEMS conference on Describing Early Modern Handwriting last week. For me, this was something of a relief. My crabby little scrawl is far, far worse than the reasonably neat italic of Edward Blount who probably lead the group that published the First Folio. Blount’s writing is pictured below on a short receipt in the State Papers archive – the scrap survives because Blount was a key trade contact for several leading diplomats, dealing not just in books and manuscripts, but an eclectic assortment of artworks, seeds, and treacle. 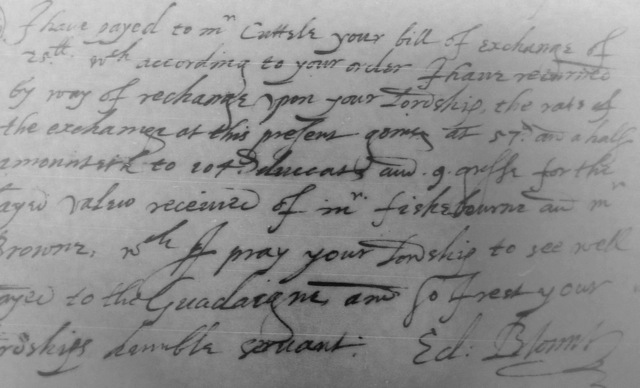 Samples of handwriting for all four (or five, if you count both Jaggards) publishers of Shakespeare’s folio do survive, scattered around. And, though we can’t tell how organised, religious or in love they were in 1623 from these samples, Tom Davis, the forensic expert I mentioned earlier (his website gives an insight into a truly remarkable career), did mention you can usually tell if someone is right- or left-handed, by the direction of their short, horizontal strokes. The cross of a lower-case t, for instance, or the bar in an upper-case A. If you’re a leftie, you probably cross these letters with a stroke moving from right to left; the reverse is also true.

Edward Blount, then, was probably right-handed, like me. See the way his stroke fades out to the right of those two ts? A bit of a shame that; he also published first editions of Montaigne, Marlowe, Charron and Cervantes, and I’d quite like him to have been a creative-genius leftie type.

And the other publishers? I don’t have a proper sample of Isaac Jaggard‘s handwriting to hand, I’m afraid, but a closer look at the ts and As of the other two (John Smethwick and William Aspley), confirms they were also probably right-handed chaps. 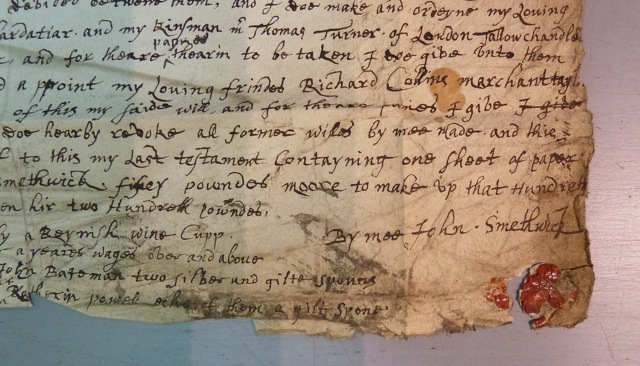 John Smethwick’s italic handwriting and signature, from his original will 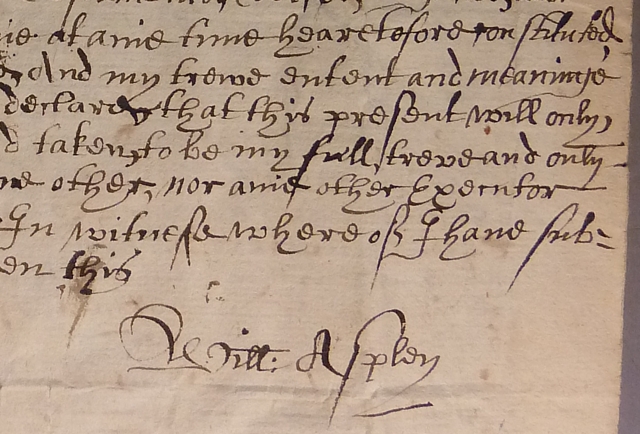 William Aspley’s hand and signature, also from his original will

Three quick final points about this handwriting: the first a disclaimer. Pip Willcox, digital editor of the Sprint for Shakespeare project, reminds me that in the nineteenth century, students were discouraged from writing left-handed. I don’t know whether this disapproval was already entrenched in the Elizabethan grammar schools Shakespeare’s publishers attended, but would love to hear from anyone who does.

Secondly – the reason handwriting samples survive for each of the folio publishers is because they were an elite bunch. Their signatures appear on official documents, in diplomatic correspondence, and most of them accrued a large enough estate to warrant writing a will.

The majority of stationers from this time left little or no traces in the documentary archive, and this is one index to the significance of the folio syndicate within their peer group.

Secondly, in his will, dated 1640 and pictured above, William Aspley specifically named his most valuable copyrights in bequests to relatives. Several authors and works are mentioned: the theologian John Boys (the dean of Canterbury, not the Cambridge Greek professor), the French philosopher Pierre Charron, and the popular preacher Roger Fenton. Shakespeare, however, did not make this list. Meaning that by 1640, Aspley thought it was not worth specifically naming Shakespeare’s plays in his bequests. Which in hindsight, given the bidding wars over Shakespeare’s rights in the time of Jacob Tonson, his relatives may not have thanked him for.

One thought on “Lefties or Righties? The handwriting of Shakespeare’s publishers”