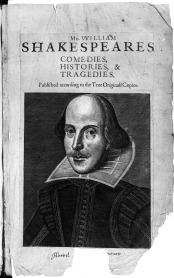 What’s special about this book?

Without it, half of Shakespeare’s dramatic work would have joined the scores of lost plays by other writers from the Elizabethan and Jacobean period.

We would know nothing of heroines such as Rosalind, or Viola, or Hermione, or Cleopatra.

We would never have had “Friends, Romans and countrymen, lend me your ears” (because we wouldn’t have had Julius Caesar) or “Double, double, toil and trouble” (no Macbeth) or “Fear no more the heat o’th’sun” (no Cymbeline).

Quite simply, Shakespeare’s reputation in subsequent ages depends on this collection of his work, published posthumously in an ambitious publishing project involving his fellow actors John Heminge and Henry Condell, and the publishing syndicate headed by Edward Blount.

What’s special about the copy in the Bodleian?

While copies of this book are not uncommon, this one is a rarity because it has not been rebound or restored during almost four centuries since it was first received by the library in 1623.

Its unique marks of wear connect us with the tastes of early readers, and we can see how their hands have worn the pages of Romeo and Juliet almost to shreds, while leaving King John virtually pristine.

Because the volume left the library in the 1660s and was returned after a fundraising campaign to buy it at the turn of the 20th century, it has a particular place in the Bodleian’s more recent history, showing us the affection felt for the library’s collections by many people, and the significance of the Bodleian’s holdings for the cultural life of the nation.

A story to launch a thousand donations

The Bodleian received a copy of Shakespeare’s First Folio in 1623, but appears to have sold it at some point in the late 1660s, perhaps having replaced it with the new, improved, edition, the Third Folio, with its additional plays, which was published in 1663/4.

The whereabouts of the Bodleian’s copy were unknown until 1905, when an undergraduate at Magdalen College brought a book to a sub-librarian, on duty in the reading room, for advice on its rebinding.

Falconer Madan, the sub-librarian, immediately identified the volume as the lost First Folio. Publicity about the find led to the owners, the Turbutt family of Derbyshire, being approached by a bookseller intermediary, offering the huge sum of £3,000 on behalf of an anonymous buyer. The Turbutts offered the Bodleian the chance to match the offer, and thus the first public fund-raising campaign in the library’s history was born.

Oxford graduates were approached via their colleges and a letter in The Times newspaper, asking for contributions to buy back the First Folio.

But many of the donors were not Oxford graduates. All their letters and cards are preserved in the Library’s archive, and make fascinating reading.

Miss Browne begs to be allowed to make a small contribution towards the repurchase for the Bodleian of the Shakespeare Folio, although she has no connection with the university.

If you do not disdain small offerings from willing offerers, please find enclosed.

5 shillings was enclosed, with the heartfelt postscript, referring to the American philanthropist, “I wish you could get at Mr Carnegie!”

Your appeal re 1st Folio Shakespeare has reached me and I think every patriotic Englishman should answer to it. I am only a poor professor with a big family but will subscribe as much as I can afford, viz. £5.

Over 80 subscribers pledged the money required, the last donations arriving in the nick of time.

Their average donation was around one guinea (the equivalent of about £60 today).

It was widely rumoured that the anonymous buyer was American. Only later was it revealed that he was the chairman of Standard Oil, Henry Clay Folger, who already owned 23 copies of the First Folio and would go on to buy over 50 more – but not this one.

Having lost its First Folio once, the Bodleian was determined not to lose it again. Thanks to you, we have raised the money to conserve this prodigal book for the future, and bring it, in digital form, to the world now.

Find out more about the Bodleian’s First Folio, a highlight in the recent Treasures of the Bodleian exhibition, from Dr Emma Smith.

Over the last 106 years, the First Folio has occasionally been photographed by experts at the Bodleian Libraries, and, before that, by Oxford University Press. Imaging Services have kindly digitized negatives of these photographs, dating from the 1930s to the 1970s, for the Sprint for Shakespeare campaign.

7 thoughts on “The Bodleian’s First Folio”